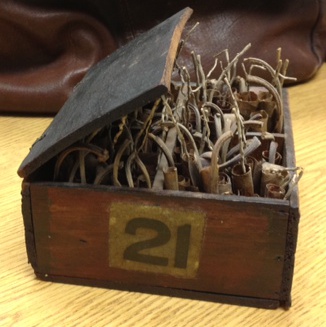 I have a small mysterious wooden box.

It was a gift from a friend, and an empty house, and a departed soul. At this writing, in January 2014, I have had it for just over a year. It is old, with tiny hinges and half a lid (broken edge, worn splinter-free) and the number “21” on two of its sides.

Inside are four compartments, each carefully filled with carefully-rolled dry leaves. I can’t tell what kind of leaves they are. Something sturdy, like red oak.

There is writing on the inside of the lid: pale pencil marks I could never read before, or only almost-read. Something about the light, or my eyes, or the box’s wishes changed tonight, and I can read it. I know it much better now.

It was a typesetter’s box. 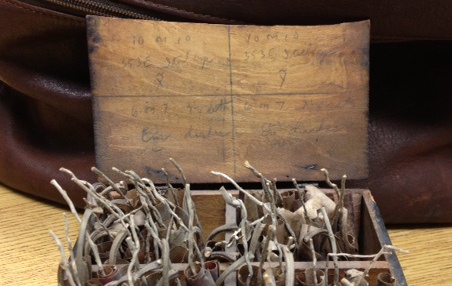 Two compartments, before they held leaves, held dashes (which before tonight might have said “disks” or “darker” or “dishes”)—em dashes and en dashes, the E’s written in loops like backwards 3’s, which contrast sharply with the straight-line E’s above them (a different hand? a different mood?).

Dashes are charming to me, with their elegant herding abilities. I use them carefully and often, and won’t write a double hyphen when I should write an em dash.

The other two compartments held Italic capital X-tildes (X̃) and Y-tildes (Ỹ), which I have never had call to use but which apparently stand for an old statistical mean and a new one.

The box felt relieved when it was given to me. It relaxed into my hands, after others had looked at it and shaken their heads and left it on its shelf. But it kept its history to itself, letting me love it on its present merits. I love it even more now, knowing a bit more of its past, imagining it is the twenty-first in a series of boxes that used to sit companionably together on a fitted shelf, or in a cabinet, ready to work, to spell, to indicate pauses and spans, and old things and new ones. 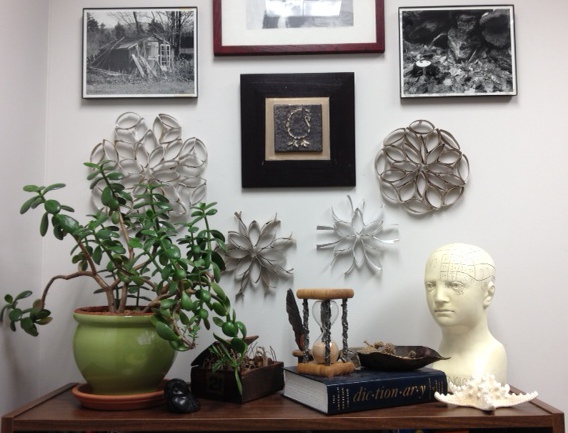 It misses its companions, but it sits among other small mysterious beloved things, and I think it is happy.

Here are all the characters: